There’s widespread use of adblockers on the web but users are increasingly blocking cookies and other tracking scripts too.

Browsers such as Safari, Firefox and Brave are privacy-focused. Many users install additional plugins such as uBlock Origin to better protect themselves.

Is Google Analytics still efficient considering the blocking rate? How big is the data inaccuracy due to the blocking? I made an experiment to find out.

21% of laptop/desktop users, 57% of Firefox users, 53% of Linux users and 65% of DuckDuckGo users block Google Analytics.

Let’s look into the details.

How I implemented my study

Google Analytics is the most popular web analytics tool installed on more than half of all websites online. Plausible Analytics is a new, privacy-friendly web stats tool that I’m working on.

Plausible Analytics differs from Google Analytics as it is modern-looking, lightweight, fast loading, doesn’t collect any personal data and doesn’t have any connection with ad-tech and surveillance capitalism.

It’s worth noting that it’s rare for the data from two analytics providers to have complete parity. Plausible Analytics and Google Analytics have different measurement methodologies and define certain metrics differently.

So even if there were no blockers at all, some differences in data between Plausible Analytics and Google Analytics were likely to be seen.

Some audiences are more privacy-conscious and more tech-savvy than others so I compared three different sites to get a better idea of the differences:

No new content was published on these sites during June. This was important, especially for the tech site.

New posts get shared on tech communities such as Lobsters, Hacker News and Reddit which would dramatically increase the level of traffic that’s blocking Google Analytics.

My idea was to have a more mainstream audience that’s discovering the content on Google. This is more representative of the average web user than someone clicking on a link on Hacker News.

Considering the fact that Plausible Analytics and Google Analytics measure unique visitors in a different way, I also looked at the total page views:

It is not surprising to see such a high number of Firefox users block Google Analytics.

Firefox has in recent years reinvented itself and has put a lot of development into making the web a faster and more user-friendly place.

Firefox is still the smallest of the three mainstream browsers with only a 7% share of users.

Safari was a big surprise to me. With all the marketing Apple does focused on privacy and with them even highlighting Google Analytics as being blocked, I was expecting numbers closer to Firefox.

Mobile devices are ubiquitous and are the most popular way to access the web. But they’re also more restrictive in terms of the ability to install a content blocker.

This shows in the numbers with only 8% of mobile users blocking Google Analytics while 21% of desktop users do the same.

The number of Linux users blocking Google Analytics is not surprising as the default browser in the majority of Linux distributions is Firefox.

But Linux is also the least popular of the operating systems with only 8% of the total laptop/desktop market.

More surprising to me was that Windows users block Google Analytics more than macOS users. macOS has become a mainstream product in recent years but I still expected macOS audience to be more privacy-focused or tech-savvy.

1% of all search users used DuckDuckGo to find the three websites in my study but 65% of them block Google Analytics.

Google is completely dominant with 97% of searches between the top three search engines. Google makes all their money with advertising so it may not be the best news for them that 9% of their users block Google Analytics too.

Is your audience mostly on mobile devices and use Safari on iOS? There’s still a decent blocking rate but nothing too dramatic. If you don’t really need to know accurate stats and you don’t mind the privacy-invasive practices, Google Analytics may still be useful to you.

That’s unless Apple actually does start blocking Google Analytics like their advertising makes it sound that they do. 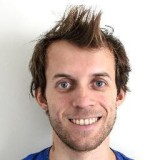 I’m on a mission to help you share what you love, get discovered by people who love the same things too and make the web a better place at the same time. Find me on Twitter and Mastodon too.